Recent research has revealed that although construction companies recognise the importance of addressing modern slavery, many are simply putting policies in place rather than taking real action to prevent modern slavery throughout their supply chains.

While 72% of construction companies surveyed by the University of Nottingham’s Rights Lab had a modern slavery policy in place, just 39% had been carrying out due diligence actions related to modern slavery for more than six months. Concerningly, 17% said they had no intention of carrying out due diligence in the foreseeable future. This is worrying because when it comes to addressing modern slavery, just putting a policy in place isn’t enough. Businesses must take ongoing action to ensure that modern slavery doesn’t occur in their own organisation, or in their supply chain. 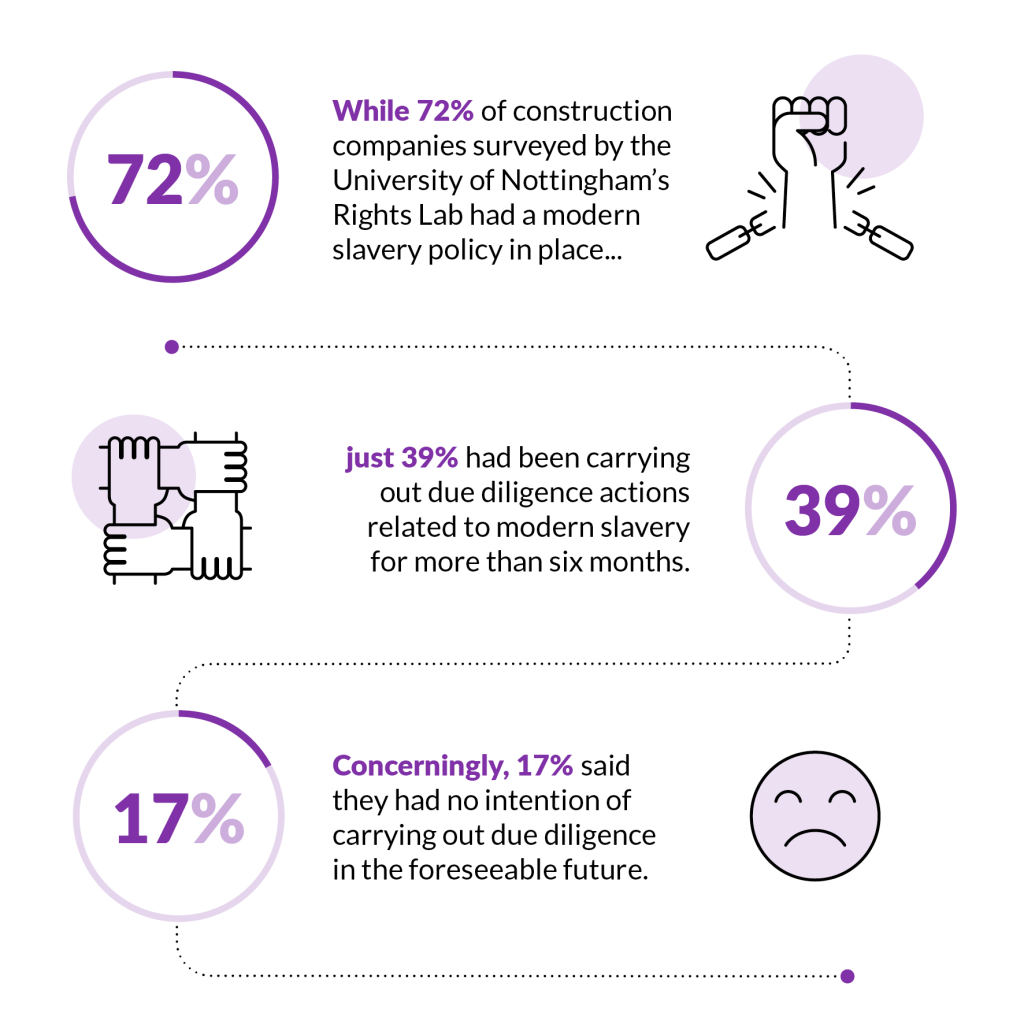 The Government is putting its own measures in place to eradicate modern slavery, such as the Modern Slavery Act 2015, which requires companies with an annual turnover of £36m or more to report on steps taken to address the risk. However, as over 90% of all businesses in the construction industry are SMEs, the vast majority of construction firms aren’t obligated to comply with this Act. The Department for Business, Energy and Industrial Strategy (BEIS) also recently announced plans for a new ‘workers’ watchdog’ to tackle modern slavery, protect agency workers and enforce the minimum wage. However, they have said that this new watchdog will be established through legislation ‘when parliamentary time allows’, which means we could be waiting some time for it to become a reality.

With an estimated 18% of all forced labour victims working in construction, firms in our industry cannot afford to wait for further Government guidance to take anti-slavery action. Here are our top tips for preventing modern slavery within your supply chain:

If your business supplies goods and/or services, has an annual turnover of £36m or more and carries on a business or part of a business in the UK, you are required to comply with the Modern Slavery Act by producing a slavery and human trafficking statement for each financial year. This must set out the steps you have taken within that year to ensure that slavery and human trafficking is not taking place in any of your organisation’s supply chains, and in any part of your own business’. If no steps have been taken, you must confirm this within your report. If you’re required to comply with the Act, then it can be a useful tool to help you to get buy-in for anti-slavery action from stakeholders from across your organisation, so make sure you meet your reporting requirements.

Often, responsibility for preventing modern slavery can fall through the cracks of different departments, so it’s important to make specific team members accountable for ensuring that your organisation is taking action against forced labour. As a minimum, this should involve appointing a senior member of your team as your organisation’s ‘Modern Slavery Lead’. This person will be held accountable for ensuring that ethical labour standards are applied throughout your supply chain, and their performance should be measured against this responsibility. You should also consider appointing ‘Modern Slavery Champions’ throughout your business – these Champions should be responsible for raising awareness of modern slavery within the general workforce and encouraging their peers to engage with your modern slavery initiatives.

Make everyone aware of the signs

It’s important to ensure that every member of your team knows how to recognise the signs of forced labour, because the more people that are looking out for signs of slavery, the more likely you are to be able to identify and deal with issues quickly. So provide your workforce with regular training on modern slavery, and ask them to look out for signs that someone may be a victim of forced labour.

It’s also important for your employees to know who they can report any concerns around modern slavery to, and understand that their concerns will be taken seriously.

It’s not enough for you to simply look within your own organisation for signs of modern slavery – if your suppliers aren’t as stringent in their anti-slavery actions as your business is, then they may be using forced labour victims to work on your projects. It’s therefore vital that you ensure that every supplier that you work with has a robust modern slavery policy in place.

Becoming a Constructionline member can help you to eradicate modern slavery throughout the supply chain, because our pre-qualification question set contains a number of questions around modern slavery. All of our suppliers are required to complete the questionnaire before they become visible on our platform, so whether you’re searching for a new or existing supplier, you can easily see which suppliers meet your high standards when it comes to taking action against forced labour. To find out more about how Constructionline can help you to find and manage suppliers that meet your requirements, contact us here.

Start searching the platform for Suppliers with Modern Slavery compliance

Log into your profile and start completing the Modern Slavery section

Hill is one of the country’s top house builders, specialising in developing homes of distinction across London and the South East. Innovation, design excellence, quality build and respect for the local environment are key to their success, which has been recognised through several major industry awards. …

Following a comprehensive review of their supply chain data management systems and the providers of this technology available in the market place, construction and development firm Wates Group adopted Constructionline in a bid to streamline procurement processes and reduce risk across all its contracting divisions. …

How can we help?

Your message has been received, we will get back to you as soon as possible!

Your message could not be sent at this time.

This website uses cookies to improve your experience while you navigate through the website. Out of these, the cookies that are categorized as necessary are stored on your browser as they are essential for the working of basic functionalities of the website. We also use third-party cookies that help us analyze and understand how you use this website. These cookies will be stored in your browser only with your consent. You also have the option to opt-out of these cookies. But opting out of some of these cookies may affect your browsing experience.
Necessary Always Enabled
Necessary cookies are absolutely essential for the website to function properly. This category only includes cookies that ensures basic functionalities and security features of the website. These cookies do not store any personal information.
Non-necessary
Any cookies that may not be particularly necessary for the website to function and is used specifically to collect user personal data via analytics, ads, other embedded contents are termed as non-necessary cookies. It is mandatory to procure user consent prior to running these cookies on your website.
SAVE & ACCEPT